What is a sea lion?

A sea lion, just like a human, elephant and dog or cat that you may have at home, is a mammal. That means sea lions have skeletons. They’re warm-blooded with a temperature of about 37 degrees. Sea lions also have lungs like humans and don’t have gills, so they have to breathe above water. Sea lions can stay underwater much longer than we can. Depending on the species, this can be range from fifteen minutes to half an hour longer.

A sea lion is called sea lion because the males, like lions, have long hairs on their necks. Although the sea lion does not look like your average dog or the neighbour’s dog, a sea lion’s baby is called a pup, just like any common dog.

There are 15 different kinds of sea lions and sea bears! The one you probably know best is the Californian sea lion, and this is the same species that live with us. It is a species that is also widely kept in other zoos and aquariums. In the wild, this species inhabits the Californian coast.

A sea lion is well adapted to life at sea. Sea lions are well streamlined, so they glide quickly through the water.
The male Californian sea lion can reach up to 2-2.5 metres long and can weigh up to 200-400 kg. The females grow to 1.5-2 metres long and weigh about 50-110 kg. That is, of course, quite heavy. The animals have to be this heavy to be able to keep warm. People put on warm clothes and at night we lie in a warm bed, but sea lions are always outside. Sea lions are in the water a lot, which is much colder than they are (they are mammals, so warm-blooded animals). That’s why they need a different kind of protection to stay warm. The weight of the sea lions is due to their thick layer of fat, which keeps them warm even though the water is still so cold.

Below are some interesting facts about the Californian sea lion.

Would you like to know more about the sea lions? Book one of our packages here 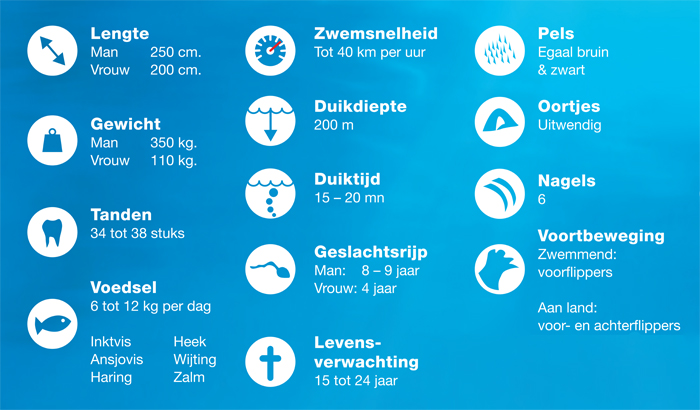